DUST TO DUST digs beneath the devastation of systematic wartime rape to uncover a transcendant inner grace.

DUST TO DUST performed at:

Howl Round: Performance Art at the UN

'Dust to Dust' is a deeply visceral experience... Hess' presentation of both the main character and the soldier who rapes her is chilling. As the soldier, who performs the act of rape, she is blatant and forceful. Though grief-stricken, the main character is never completely broken. As part of her cries out, another part of her stands strong before moving on to the next moment. As we sense the danger, real and apparent, we understand that there is a longing for something complete and something better.

Transcendent imagery, evoked in word and body, are an essential part of the piece. In reclamation, one can find one's darkness as well as one's light. the symbolic imagery is impressive and deeply poetic. Moments of the play involve Black Beauty and Pegasus, the winged horse. Taking a fantastic point of view, Hess is able to find paths towards transcendence.

Hess has the uncanny ability to turn the makings of her words, as well as the workings of her mind and body into an hallucinatory, roller-coaster ride, not ulike watching a flickering strobe light...Speaking in staccato-like cadences the visibly agitated Hess begins to chant words that reveal her inner thoughts which in turn trigger ours...we watch as Hess's everywoman muscularly re-enacts scenes of...prison camp atrocities and an early childhood molestation. The only escape from pain for these women, and perhaps the audience as well and this is only for a moment, is when Hess's characters, in order to escape the pain, return to their cildhood where innocence reigned supreme, and safety was a given.

DUST TO DUST is written in heightened langauge that matches the phantasmagoric subject matter. Impressionistic, emotionally raw and incredibly real, it also allows the audience room to breathe, while they absorb the horror and beauty that envelope its twin protagonists. Moving from the monstrous trap of Bosnian genocide to the more mundane trap of airport security lines, to the invisible trap of interpersonal objectification,E lizabeth Hess wites with a poet's grace, and a journalist's unflinching eye. Her material is drawn from real life accounts, but blends in psychic imaginary detail that gives us the distance we need in order to process it.

I was struck by the writer's honesty, poetry, bravery, and the challenge it presented to an audience. Elizabeth has an original voice, and one that is also current in today's search for culture and truth. Her work in the pieece complemented her stellar writing in a way that made it accessible and alarming. The audience was heart-broken by DUST TO DUST but they allowed it to affect them.

The Metro NY Chapter of the UN National Committee for UN Women hosted Elizabeth Hess' Performance of 'Dust To Dust'...a performance piece in its own right, that also speaks directly to the issue of gender-based violence by addressing systematic wartime rape. Hess explained "It makes it clear that the central issue is not sex, but violence. It's the objectification of women that leads to such acts of dehumanization and they are culturally intertwined."...While acting out the physical trauma, Hess depicted the mental and emotional strength of the women. She described how many women were able to cope by mentally removing themselves from the horrific ordeal, instead focusing on a fond memory. In such situations, "the mind and soul separates to create another scenario in order to survive", Hess explained in the Q&A after the performance. 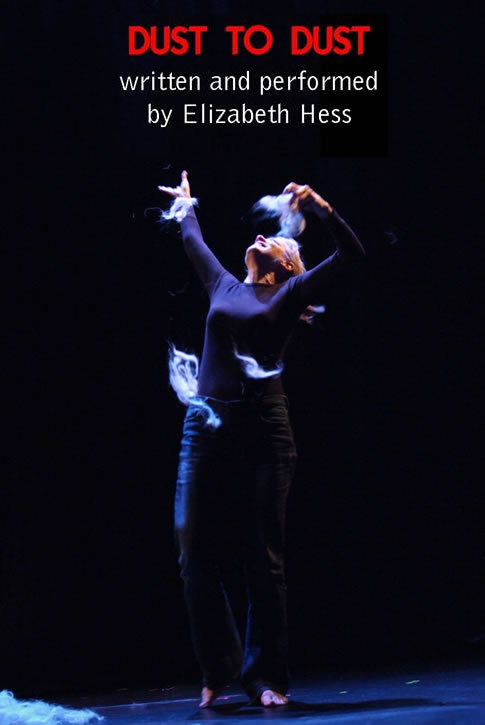